December 2001
Birth of the Bad Asses
Britney Spears (50%) draws Alyssa Milano (50%) Alyssa Milano leaps out the ring as Britney Spears enters the arena and starts to walk up the aisle. The brunette dressed in her Eva Savelot out fit of black leather tank top and leather hot pants, resembles her commercial character intercepting someone about to make a call, and not using 1-800-COLLECT. Alyssa greets the blonde half way up the aisle by leaping on her, knocking the blonde to the ground and plastering her face with punches. Things had happened so quickly, Britney had already absorbed many punches to her face before she got the presence about her to flinch and throw a smaller Alyssa from on top of her. Britney, then started firing back with punches of her own to Alyssa's pretty face.

Britney takes the offensive and pulls Alyssa to her feet, and slings her into the barrier separating the crowd from the aisle. Alyssa grunts as her back slams against the iron barricade. Britney closes in on Alyssa to press her advantage, when the brunette surprises her by lifting her up and dropping the blonde tits first on the iron barricade. Britney exclaims in pain, and grabs her tits muttering, "My boobies!" Alyssa clobbers the young champion over the back of the head and sends her toppling over the barrier and into the fan's seats.

Alyssa quickly leaps over after Britney. She stomps the blonde's champion's tight stomach before Britney could make it to her feet. Britney sits up only to be kicked in the face. The back of her head snaps back and slams into the iron barricade behind her, giving her a double impact. Alyssa kicks Britney's face a couple more times until the young blonde starts to slump over onto her side. Alyssa pulls the hurting blonde to her feet. Britney's head is spinning, as the brunette captures her in a headlock and starts to usher the blonde through the fans and up the stairs from the lower level seats towards the arena's upper level.

Half way up the stairs, tries to weakly fight back, but Alyssa quiets those mild protest with a couple well placed forearm shots. Alyssa keeps dragging Britney up the stairs, until they reach the upper level of the arena where an tunnel opens into the concessions area. Once inside of the tunnel, Alyssa eagerly slings Britney face first into the concrete wall of the tunnel. Britney hits the wall with a splat and starts to sink to the floor, but before she able, Alyssa captures her and slings her into the opposite wall of the tunnel, then back into the other wall, and back into the opposite wall again. Finally Britney collapses to the floor with stars circling her head. Alyssa reaches down and snatches Britney's white vynil halter top off over her head, leaving the blonde topless, now only wearing the tight matching white vynil pants. Alyssa pulls the woozy blonde girl to her feet saying, "It's not over yet, sweetie!"

Alyssa uses Britney's hair and leads the stumbling blonde through the tunnel and out into the concession area. Alyssa leads Britney to a hot dog concession stand counter and slams her face into the counter top. Alyssa lifts Britney up and places her on the counter, then pushes her over the off the counter into the kitchen area. The staff sees the battle coming their way, and quickly scramble out of a side door, as Alyssa hops over the counter to follow Britney into the concession area. The dazed blonde is struggling to her feet till Alyssa grabs a tray with hot dogs on it and slams it over Britney's head. Britney slinks back down to a seated position on her ass, nearly out. Alyssa picks up one of the hot dogs off the ground and uses a handful of hair to lift Britney's head so she can look at the champion eye to eye. Alyssa takes the hot dog and smears it into Britney's face to demean the beaten champion. Finally with Britney sitting helplessly in the corner, with her head bowed, resting on her chest, Alyssa takes a pot of melted nacho cheese, and pours the hot cheese over Britney's head. The defenseless blonde exhales a long, loud groan of pain as the hot cheese covers her head and slowly runs down covering her body.

Alyssa steps back and smiles, admiring her handiwork. She smiles even harder realizing she is finally about to regain the Warqueen title that Britney took from her years ago. Suddenly the side door to the concession booth burst open, and Melissa Joan Hart comes through.

"I was hoping you'd show up," purrs Alyssa, "we have some unfinished business to tend to."

With that Melissa & Alyssa engage in a brief slugfest. They trade punch after punch till Alyssa's fist wobble the second blonde. That momentary lapse was enough opening for Alyssa to unleash a quick combination of punches to Melissa's face that put the young actress on Dream Street. Now with Melissa's eyes mindlessly dancing around her skull Alyssa grabs a handful of blonde hair and leads the blonde out of the kitchen. Alyssa says, "You little shit nugget, I'm going to flush you away once and for all!" Alyssa drags Melissa out the side door and out of the concessions booth.

Right after Alyssa & Melissa leave, the other Generation Next members, Nelly Furtado, and the newest recruit, singer Mya enter the concession booth and tend to Britney. They help the young blonde to her feet and to regain her senses. Britney quickly regained her wits about her, Britney says, "Come on lets go finish that little witch."

The cheese covered Britney, Mya & Nelly leave the concession booth and finds Alyssa & Melissa down the hall in a nearby bathroom. Alyssa has Melissa's head forced under the water of a toilet. The young blonde is coughing, gagging and pitfully pleading for anyone to help her.

"Let her go you slut!!" Britney announces "We're gonna kick your ass... We're gonna make you sorry you EVER messed with Generation Next!"

"Oh yeah" Alyssa says as she calmly releases the gasping blonde and allows her to take her head out of the toilet bowl. "Britney, I knew you didn't have the guts or skill to fight me by yourself, so I bought some help this time." Alyssa said as she pointed behind the three young singers.

In all the chaos Britney, Nelly or Mya had not noticed others entered the bathroom after they did. They turned to find Christina Applegate, Jenny McCarthy and Nikki Cox standing behind them. Instantly the room exploded into a four on fur free-for-all.

A few minutes later the commissioner, Stone Rage burst into the bathroom and yells, "Enough!!!... This match is over.... There's no winner... A No Contest!" No truer words were spoken. Christina had Mya captured headlock, pounding her face with punch after punch. Nikki had Nelly trapped against a wall. Her right hand clasped firmly around the Canadian's throat while her knee repeatedly rammed into Nelly's pussy. Jenny stood over Melissa's defenseless body kicking, punching or stomping whatever body part she desired at will. A teary eyed Britney cowered in a corner pitifully trying to cover up as Alyssa's fist stung any exposed area.

"I said enough!" repeated Stone Rage as he walked over and pushed Alyssa away from his tortured champion. Poor Britney collapsed into his arms and burst into tears.

"No we've had enough of you!" spit a defiant Alyssa, as she gathered her crew and left the bathroom, leaving a defeated & devastated Generation Next behind.

The scene shifts to Alyssa's dressing room, where Alyssa, Christina, Nikki & Jenny celebrate like its New Year's Eve. Backstage reporter, Downtown Julie Brown enters with her camera crew attempting to beak the story on this apparent new alliance. "Alyssa!" says Julie as she approaches, "Alyssa, what's going on here? You didn't win the title, but you're celebrating... tell me and the fans the story!"

"Well Julie, we're sick of Stone Rage's shit!" starts Alyssa. "He's always giving us shit, while he constantly protects his favorites like Britney, Halle J. Lo and others. We're sick of it!!! Just call Jenny, Christina, Nikki and me, The Bad Asses, and we're here to take down all of Stone Rage's favorites...... like you, Julie!"

Julie has a puzzled look on her face at Alyssa's last comment, but before she can inquire about it, Jenny clobbers her over the back of the head. Alyssa forces the Brit's head between her legs, and Nikki & Chrristina each grab a leg and lift Julie upside down. Alyssa drops down and executes a pile driver on the former MTV VJ while Christina & Nikki push down on Julie's legs to give the maneuver extra force. Julie is knocked out upon impact of the move, and her limp body falls to the ground. All the 'Bad Asses' swarm around Julie, and remove her dress in an instant, leaving the unconscious Brit in her panties, garter & stockings.

Alyssa gets a large marker off of her dresser while the others place a limp Julie in a seated position in front of the camera. "Julie baby" purrs Alyssa "Tell Stoney and these girls they had better beware... " Alyssa starts to write '#1 Britney & Gen Next' across the unconscious reporter's chest.

Nikki blurts, "That damn Pam Anderson for pouring shit on me!!" ^Alyssa writes '#2. Pam Anderson' on Julie's chest, and looks at her colleagues for more suggestions.

"Put down Tia Carrere for me" says Christina, thinking back to their match. + So Alyssa adds, '#4 Tia Carrere'

With their point made, the four ladies toss Julie's unconscious carcass out into the hall, yelling "Tell Rage we're coming for him and his little bitches." The door closes, and the Bad Asses continue their party. 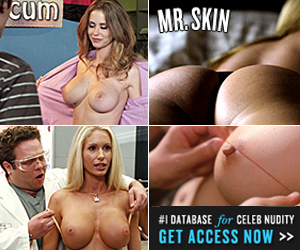