February 2001
Title Turmoil
Britney Spears (52%) escapes Alyssa Milano (48%) Alyssa Milano is a former Warqueen champion and realizes just how rare an opportunity at the title is. She also remembers the horrifying experience of Britney Spears tossing her over the top of the cage in their last title match. Recent losses to Halle Berry* and Christina Aguilera** have not helped her confidence much going into this all-important match. Alyssa hid her fears and concerns and looked confident as she waited in her corner for the champion to arrive. Alyssa received quite a few whistles and catcalls attractively dressed in her tight black leather pants and black tank top from the Eva Savelot TV commercials.

Britney did not make her rival wait very long as she emerged from the dressing room with a lot of music and fanfare. Britney wore the red, white & blue colors of her new corporate sponsor, Pepsi. Most fans admit the Pepsi colors never looked as delightful as they looked barely covering Britney. Britney wore a red & blue bikini top and blue pants with the words Pepsi and the company logo emblazoned across her ample ass. Alyssa was extremely relieved she was not accompanied by her Generation Next teammates Le Ann Rimes, Aaliyah, and Melissa Joan Hart.

Britney has been receiving a lot of complaints from competitors and fans that claim she takes unfair advantages to win her matches. There is a cry from some fans to even have Britney banned for some time. The referee is obviously one of the supporters for Britney's banning because he quickly jumps in her face with threats of disqualification and awarding the belt to Alyssa for any wrongdoing. Britney did not take kindly to the treatment from the official and started arguing back. Soon their argument ended when Britney buries her fist into the referee's stomach. She continued her assault by kicking the referee in the stomach, driving him back into the ropes. The blonde continued hitting the official about the head until Alyssa came in from behind and captured the champion in a full nelson.

Britney proves to be a lot stronger than her rival and powers out of the hold. Britney spins around and kicks the brunette in the stomach and knocks her to the mat. Britney barely lets a moment pass before she is back on the attack and grabs Alyssa's ankles and holds them in place to deliver stinging kicks to her exposed hamstring. A few of the kicks impact a little lower to Alyssa's groin. Britney released the challenger and watches as she struggles to her hands & knees. This allows Britney to get a running start and kick the former champion in the ribs. One last kick to Alyssa's sexy hips forces the actress to roll under the ropes to the arena floor to escape this beating.

Some loud fans at ringside start holding up 'Ban Britney' signs and yelling and insulting the blonde bombshell champion. Britney begins to yell and argue back at the fans, as if she completely forgot she was in a championship match. Alyssa was able to recover, return to the ring and nail Britney with a drop kick to her turned back. The force of the blow nearly knocked Britney out of the ring, but left the champion draped doubled over the top rope. Alyssa peels the blonde off the ropes scoops the champion up across her shoulders in a fireman's carry. She spins her around a few times before dumping her to the mat. Alyssa repays Britney for some of her earlier indignities and kicks the teen in her big round ass. Britney rolls over to her back to protect her backside, but Alyssa stomps her in her gut once she does.

The brunette presses her advantage, and tries to haul Britney to her feet. The crafty youngster reaches up and grabs Alyssa's hair and uses it to flip her over to the mat. Britney captures the brunette in a side headlock, and escorts her over to the ring ropes. Britney forces the contender's throat over the top rope attempting to choke Alyssa out. Britney climbs onto Alyssa's back to get better leverage to push down onto Alyssa's throat. In her zeal to inflict more pain to Alyssa she did not realize she had given Alyssa an opportunity to escape. The desperate brunette reaches back and finds a handful of blonde hair, and uses it to flip Britney over her shoulders and out of the ring to the arena floor. Britney takes a hard tumble out of the ring and takes her time getting back to her feet and back into the ring. She is obviously favoring her lower back, holding it and wincing in pain. Alyssa too needed the breather to recuperate from the beating she has been receiving.

Britney climbs back on the ring apron to find the contender waiting on her. Alyssa grabs two handfuls of blonde hair and flips Britney over the top rope and into the ring. Alyssa locks Britney into a front face lock as the champion regains her feet and wrenches the blonde's head from side to side.

With the tight lock on Britney cutting off her air supply, and the teen's struggles subside a bit Alyssa lifts Brtiney upside down into position for a suflex. Alyssa holds Britney upside down for a while allowing the blood to rush to her head before falling back and dropping the champion on her already injured back. Britney wails in pain and again rubs her lower back. Britney lies on her back with her famous breast rapidly rising & falling at each breath. Alyssa dives on top of the champion for the pin, but the blonde easily kicks out after a two count.

Both competitors rise to their feet when Alyssa fires a short punch to Britney's belly that drops the blonde to her knees. Alyssa again captures Britney in another face lock, and claps down hard on the blonde. Once again Alyssa lifts Briiney off the mat and holds her upside down for another suflex. Britney helplessly waits for another hard fall to the canvas, but instead Alyssa seats the champion on the top turnbuckle.

Britney gasps, realizing Alyssa intends on super flexing her off the top turnbuckle to the canvas. This maneuver will obviously bring Britney's championship reign to a screeching halt. Alyssa climbs to the middle ropes and forces Britney's head under her arm so she can suflex the blonde to the canvas. Britney fights desperately to avoid the maneuver. She punches Alyssa in the side and even results to biting the brunette's side to find a way out of this predicament. Each time Britney looks like she is about to escape, Alyssa counters with her own punch to the gut or slap of the face and again puts Britney in position for the superflex. The battle on the turnbuckle went on for what seemed like forever until Alyssa's will seemed to begin to win out. Despite everything she tried Britney found herself about to be suflexed off the top rope.

After the titanic struggle on the top rope Alyssa finally has Britney in position for the long fall to the mat. Britney holds on to the ropes with her last once of strength, but it would not be enough to hold off the determined brunette. Just as Britney's last grasp was failing, and Alyssa was about to execute what was surely a match-finishing move. Melissa Joan Hart charges into the ring. Britney's allie kicks Alyssa in her exposed crotch causing her to fall off the turnbuckle grabbing her womanhood.

The referee protests the interference and is about to motion to the timekeeper for Britney's disqualification. But before he could Britney comes off the top rope and knocks the official to the mat. Melissa locks Alyssa into a camel clutch and pulls back on the contender's neck. Alyssa has no choice but to start yelling her submission at the top of her lungs. Britney locks the downed referee's head between her strong thighs and squeezes the poor man's head. Alyssa is in soo much pain she can no longer scream her submission, but she is tapping the mat indicating her surrender.

Britney looks at the man struggling between her strong thighs and says, "Now you don't want to disqualify me.... do you?" Britney purrs to her captive. "Looks like Alyssa is tapping out so I guess I win right?" The Referee, being tortured by Britney's strong thighs, gave into her demands and called for the bell and awarded the match and champion to Britney Spears and Generation Next.

Alyssa Needs eyes in the back of her head!

THEN TO THE BIRTH OF THE ABA 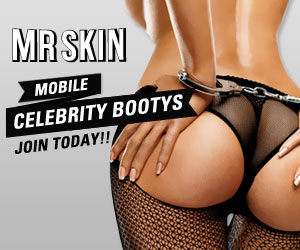