Born: October 21, 1980 Height: 5'2.5"
Kimberly Noel Kardashian is an American celebutante/socialite, model, apparel retailer and television personality. She is perhaps best known for her social life, stolen sex tape, and her role on the E! reality show Keeping Up with the Kardashians.

Kardashian was little known outside gossip circles until the pornographic home video made with then-boyfriend, R&B singer Ray J, was leaked. Kardashian pursued legal action against Vivid Entertainment, the distribution company for the ownership of the tape. Kardashian later dropped the suit and settled with Vivid Entertainment for $5 million

Kim has made as appearance on a Playboy Magazine cover and nude spread. In 2008 Kim branched out into acting and starred in the 2008 film Disaster Movie as Lisa alongside Carmen Electra. Kardashian was one of 13 participants on the seventh season of Dancing with the Stars. Kardashian also released a workout DVD, Workout with Kim Kardashian. 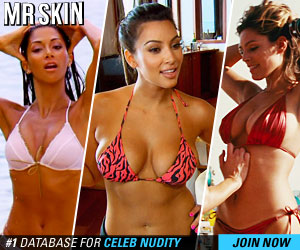